What to do when you become a victim of a scam

How I almost fell victim to a scam, whilst writing about how to avoid one.

After my usual morning coffee, I did what most working people do and checked my emails. My inbox only had one new message under the name of a colleague with a subject line of QUICK RESPONSE. As I was new at Sekura, I had received quite a few emails welcoming me to the team so I guessed this would be the same. I had already given my number to other colleagues to keep in touch therefore I was yet to question anything. Replying with my number I thought I would be given a task as stated in the email. 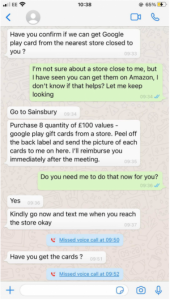 The Transition from Email to WhatsApp

The WhatsApp messages I received show the conversation that took place. Initially, I researched how you could purchase the cards my ‘colleague’ was asking for. Then I thought, how am I going to get to Sainsbury’s? Then it clicked that something wasn’t quite right.  After discussing this encounter with another colleague, it became clear this was a scam.

The irony of this situation was that I was in the process of writing about how to avoid a scam, yet it still took me a period of time to reliase what was happening. Luckily, the cards were not purchased.

Looking back on the situation there were warning signs that I should have questioned, such as:

With the knowledge it was a scam, and after thinking about it more, I felt foolish for answering in the first place. However, scam rates are increasing fast, and scammers are getting creative with how they are obtaining these large sums of money from victims. If you feel unsure in a scenario involving money, don’t ignore this feeling. You can always say no and question it with professionals such as your bank.

We will always protect your data and never use it for anything else other than the information you’ve requested. We’ll never sell your data.